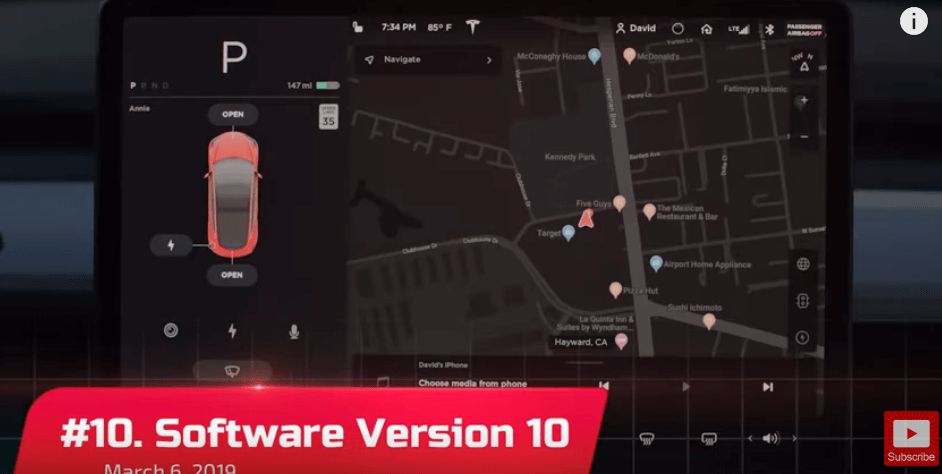 By:: Johnna In:: Tesla Adventure COMMENTS:: 0

Eli Burton, the creator of The Adventures of Starman, gives us 2019’s Top 10 Tesla Moments. Tesla has had a pretty swell year in 2019.

From the Chinese Gigafactory rising from the mud pits of nothingness to the unveiling of my future truck, the Cybertruck, it’s been an epic year and a great ending to a decade of what seemed like uncertainty for a bit. Tesla had some struggles, especially in 2018, but those struggles became triumphs.

10. Software Version 10. On March 6, 2019, Tesla released this update that included Theather Mode which included Youtube, Hulu and Netflix as well as more games–you can only access these while parked which is great for those who are supercharging their cars on road trips. Eli says that this just signals a focus by Tesla on the in-car experience.

9. V3 Superchargers. V3 Superchargers have a charging rate of up to 200 KW and a peak of 1,000 miles per hour of charge. Typical charging time of V3 will drop to around 15 minutes. This is quicker than my phone charger. Also, there are a few whispers about the Lafayette Superchargers being built are going to be V3, but that hasn’t been confirmed.

8. Plaid Powertrain. The Plaid 3 motor powertrain should be coming to the Model S in mid-2020. A quarter-mile performance is expected to increase as well as track performance.

7. GIGA 3 Shanghai. This is a true story of an underdog. Many in the media said it would never happen, that this was just a Chinese mud field with nothing in it. Yesterday, the first Made-In-China Model 3 was delivered and there was a huge celebration. The Gigifactory in Shanghai is also the fastest factory ever built at its size.

6. Enhanced Summon. This improved the Summon capability to drive through and across the parking lot autonomously. It’s taken the world by storm and the media decried it as something to be afraid of, but in the end, it’s pretty simple and convenient. Tesla is taking the driving experience to an entire level–as in a completely new plane of existence.

5. Raven Powertrain. The Raven Powertrain increases the range and performance of the Models S and X Long Range. Drivers are allowed to travel farther than before and charge less frequently. In essence, they get more dollars out of every penny spent on charging–if they pay to charge. Many Tesla owners charge at home or work.

4. Model Y Unveil. Back in March Tesla unveiled the Model Y which looks as if the Model 3 and the Model X had a child that few up fast. It looks like a Model 3 with a hatchback.  The highlight of the event, Eli says, was Elon bringing the history of all of Tesla’s cars. I actually liked that part and Elon’s little dance as well.

3. $35,000 Model 3. This was announced in Q1 2019 just after Elon said it may not happen. However, Elon wanted to keep that promise so it closed a few of its stores. I think that the reason why Elon was able to keep this promise is due to Tesla making progress in its battery development.  I could be wrong.

2. Cybertruck Unveiling. Everyone was stunned with this beauty rolled out on to the stage. The moment I laid eyes on it, I fell in love. Unfortunately, I am one of the few people who reacted that way. Many members of the Tesla community were a bit freaked out then later fell in love. I mean, how can you not love this truck? It’s so cool. But I collect pyramids and other cool minerals so I definitely appreciate the creativity in this truck.

The unveiling was unique as well. There was a hologram of Grimes and the entire stage was really lasered up. Tesla stunned the world with this angular designed truck. Franz breaking the windows is also a moment that will be forever remembered fondly by the internet. Equally just as surprising as the design of the Cybertruck is the starting price at $39,900. Elon followed up the surprise with an all-electric ATV that can plug into the bed of the truck and charge.

1.  3Q Earnings. I really thought Eli was going to mention the stock price hitting $420 but Q3 Earnings definitely earns this spot because no one, except those of us who believe in Tesla, saw this coming. Many in the media often repeat what short-sellers say about Tesla and fully believe Tesla is a failure. Elon is often mocked in the media and Tesla is touted as a luxury fraud by the uninformed. So when those numbers hit, shockwaves made their way into the bank accounts of those shorting the stock.  Wall Street fully expected Tesla to sustain losses and it didn’t.  \Tesla believes it has grown to a point of being self-funding.